It was a mostly calm Sunday morning. Not much in the way of wind was expected. Part of the goal for today was the students to understand COB drill. With no wind it is always a difficult practice. I usually explain it to the student in the classroom, again on the boat, then as I am doing the demo.

We started at 9:25 am, both students were early so there was no need to wait. After introductions and questions to cover standard procedures and any uncomfortableness on the part of the student, we went to the boat. There at the boat I began with items to check while on the dock, how to correctly board the boat, and then went below deck. There we checked for the safety items and became aware of what equipment was aboard.

Next we moved to the cockpit and went over engine startup. After both students had the chance at starting the motor we went through parts of the boat and names followed by the students demoing the basic knots. This was followed by a short break before going out in the port.

I had a student take us off the dock. I notice he was not real comfort with backing the boat. I therefore had both students do backing practice along with docking. Docking was done on both sides of the boat, port and starboard both both facing and back windward. This was followed by docking and cast-off with a beam wind. This was a bit tricky for them but it was done.We then took a lunch break.

After lunch I gave a small lecture on C.O.M. drill along with points of sail and feeling the wind, not just looking up at the telltale. After the lecture we went out to the boat, but before boarding I again explained about the wind and feeling the direction on one’s face, with the changing points of sail.

Another student did the cast off. However before going out to practice the C.O.B drill I had the students once more practice the docking and undocking with a beam wind. Afterward we heading out on the Bay. After the sails were raised,  I demoed all points of sail, tacking and C.O.B. Then it was the students turn, the wind was strong enough to move yet calm enough fro good control.. C.O.B. is not an easy task for new sailors. Both of the students had a couple of practice turns before we needed to return to the classroom for testing.

A student took us to the dock, after the sails were lowered. Once docked, I showed the proper way to closed up the boat for the day and fold the sails. Once this was done we went to the classroom, after a short break, to do Q and A before starting the exam. Both students were comfortable and said they were ready to proceed with the written exam. 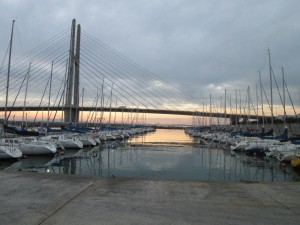 Both students passed and were congratulated.